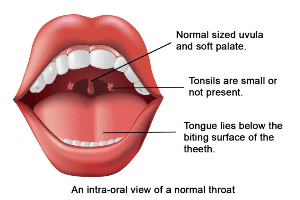 Obstructive Sleep Apnea (OSA) is a treatable disorder in which a person stops breathing many times during the night due to upper airway collapse. The inability to breathe properly can disrupt sleep and is associated with serious health problems and a diminished quality of life. Snoring is a strong indication that OSA may be present.

During normal breathing, air passes through the nose and the flexible structures in the back of the throat, such as the soft palate, uvula and tongue. While you are awake, the muscles in these structures hold the airway open. Normally, when you fall asleep, these muscles relax but still hold the airway open and healthy sleep can occur without disruption. Sleep-Disordered Breathing is a term which indicates that breathing is affected due to the sleeping process itself where the throat muscles collapse excessively and prevent adequate breathing. This in turn disrupts sleep creating a condition where both sleep and breathing are dangerously affected. Snoring and Obstructive Sleep Apnea are both considered Sleep-Disordered Breathing Events.

Night after night of improper sleep and breathing takes its toll on our quality-of-life and may include the following:

OSA and your health

The three most important fundamentals of life are eating, breathing and sleeping. Those who suffer from sleep-disordered breathing (snoring and obstructive sleep apnea) are missing out on 2 of the 3!! When breathing and sleeping are disrupted night after night, adverse health consequences are more frequently seen such as high blood pressure, heart attack and stroke. In addition, diabetes and depression become more prevalent and are harder to treat when obstructive sleep apnea is present.

People with Obstructive Sleep Apnea have higher motor vehicle crash rates based on crash records, as well as poor performance on driving simulators (similar to driving while intoxicated). Because traffic safety is under governmental regulation, there are legal implications for both private and commercial drivers/pilots if OSA is a significant cause of impaired driving. In addition, recent research shows that accidents and injuries in the workplace are increased when workers suffer from fatigue and sleepiness from obstructive sleep apnea.

Witnessed apneas occur in approximately 5% of children. Although obesity is an important risk factor in children as it is in adults, symptoms of sleep-disordered breathing will often occur in non-obese children. Studies suggest that a minimum prevalence of obstructive sleep apnea of 2 to 3% is likely, with prevalence as high as 10 to 20% in children who snore habitually. Daytime sleepiness is reported in 25 to 30% of children. According to the American Academy of Sleep Medicine, children may present with hyperactivity, inattentiveness, aggressive behavior, irritability and mood swings when they are sleep-deprived. OSA in children is a serious disorder that may result in health problems as well as behavioral and academic problems.

In many instances, snoring and sleep apnea in children can be caused by dental/facial abnormalities. Often, the upper airway can be widened through orthodontic expansion of the dental arches (a routine procedure done in most orthodontic offices).

It has been reported that the incidence of upper airway obstruction may be as high as 31% in children with Down Syndrome.

A 2002 study found that children who frequently snore or have sleep disorders are almost twice as likely to suffer from ADHD-like symptoms as those who sleep well.

According to some researchers, the upper airway of pregnant women narrows in the last trimester of pregnancy. It has been found that if a woman has severe snoring or sleep apnea, the health of both the mother and the fetus can suffer. In pregnant women, blood pressure rises as the upper airway becomes narrower. Data indicate that pregnant snorers have an increased risk for preeclampsia.

The shape of the face and dental arches in children is critical to ensuring the development of a properly functioning upper airway throughout life. Situations that tend to cause narrow dental arches or long faces can result in a compromised upper airway in the young child. Often, mouth breathing due to allergies or large tonsils and adenoids can create these harmful anatomical features and lead to snoring and sleep apnea. Sometimes, thumb-sucking or commercial pacifiers may result in narrow dental arches with compromised breathing and sleeping. Some researchers feel that breast-feeding serves to shape the dental arches in infants in a manner which increases the likelihood that the upper airway becomes adequately formed for proper breathing and sleeping.